Event 4 took place only in Cyprus. This was a three (3) day event. In terms of the content, the objective was to organize events celebrating the World Environment Day (WED) 2014 in areas with high concentration of immigrant populations in Cyprus. The main events took place on May 17, May 18 and June 03, 2014. In total, 243 people were involved in Event 4. During April and May 2014, a lot of preparatory work was carried out engaging with schools and other relevant authorities and organisations to discuss and develop the content of the events and obtain the necessary permissions.

On May 17, AKTI organized its first-day event in collaboration with Green Dot, which is a leading company on recycling in Cyprus, during the yearly recycling festival which took place at Acropolis Park, in Nicosia.  The following day on May 18, the second-day event was organized again at Acropolis Park during the morning hours in collaboration with Radio ASTRA within the 8th environmental and culture festival which was under the auspices of the Environment Commissioner. In the afternoon, AKTI partnered with the Lakatamia Municipality of Nicosia within the 6th Ecological Festival of Lakatamia, which was under the auspices of the Minister of Education and Culture, at the Linear Strovolos Park. During these high visibility environment focus public events, AKTI presented the INTERACT project and promoted to Cypriots and foreigners the aims of the World Environment Day 2014. AKTI’s representatives and volunteers shared a lot of information and resources and organised different educational environmental activities mainly for the children. On 17th and 18th May, 153 adults signed in while engaging at INTERACT’s activities.  See the photos of the events below: 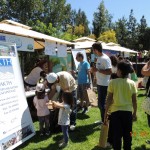 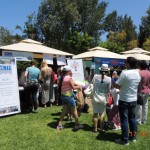 To expand its outreach around Cyprus and particularly in the district of Paphos, AKTI also participated in a Living Library event organized by the Europe Direct Office in Paphos. The event took place on 14th May 2014 and in total 44 people participated, mainly form Paphos area. AKTI’s book was focused on INTERACT project and the environment and human rights.

After various consultations with the school representatives, the third-day major event was organized at the 18th Primary school of Ayios Antonios in Limassol. The school was identified as the most appropriate school to partner with under the framework of the INTERACT project as the public school has a very high concentration of immigrant populations in Cyprus. More specifically the school consists of 40% Turkish speaking Roma children, 30% are Greek Cypriot and the rest 30% are Russians, Bulgarians, Syrians and others. The majority of the students do not speak Greek which is the main teaching language of the school and most of them are socially and economically deprived. Because of its high concentration of immigrants, the school is part of the ZEP (Zone of Educational Priority) Schools.  The event took place on June 03 2014 (two days prior to the official WED which is celebrated on June 05). The school ran a drawing completion within the school, which was completed by May 20. The theme of the competition was ‘Saving Water’, relevant to the WED 2014 theme which focused on Climate Change. Relevant educational material was prepared by AKTI and sent to the school to support the teachers in preparing the pupils for the competition. On the day of the event, an award ceremony took place to give prizes to the best three entries which were then turned into graffiti art on a dedicated school wall. Additionally, graffiti artists were painting on the wall, while other educational activities were organized. More specifically, music and theatrical performances took place, environmental games, rock and t-shirt paining as well as a water exhibition focused on water saving techniques. A representative from the Authority against Racism and Discrimination spoke to the children about their rights and the richness associated with diversity. The successful event was attended by 90 individuals, 74 children and 16 adults. See the event’s photos below: 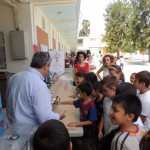 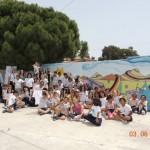 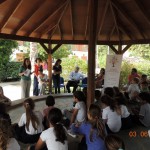 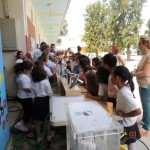 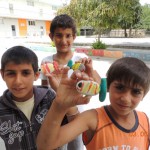 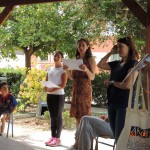 Overall in all 3 events, the geographical diversity in terms of place of residence of the 243 participants was as follows: 148 resided in Nicosia, 77 in Limassol, 16 in Larnaca, 1 in Famagusta and 1 in Brussels.

In terms of media coverage, two radio interviews were conducted on the 3rd of June at Radio Chanel 6 of Limassol and on the 5th of June at Radio Astra. In addition to the radio interviews, a press release was drafted and sent to all printed media on 04 June, 2014. The press release was published in Politis newspaper on the 5th of June 2014. Additionally, ‘Time Out’, a very popular Cypriot monthly magazine, also covered the INTERACT project and the event in Limassol in its June publication. All events were also covered on AKTI’s social media pages.

Additionally during event 4, the dissemination of the resources produced in previous events continued: further to disseminating the leaflet/poster during all public events organized, it was also strategically disseminated to relevant NGOs, educational institutions and local authorities via post. The objective of this process is to ensure all relevant stakeholders remain informed about the progress of the project with the ultimate objective of ensuring efficient and effective participation in the last event of the project which is the stakeholder forum.

To ensure a smooth coordination with the Italian partner, a virtual interim partner’s meeting between AKTI and GSI Italia took place on Friday 13 June 2014 to take stock of what has been achieved so far and plan the steps ahead.

For articles and stories published related to INTERACT’s Event 4, click below: