Organic produce is food that is grown without the use of synthetic chemicals such as human-made pesticides and fertilisers and is non-GMO (genetically modified organisms). More info.

The table below indicates teh differences between orgfanic and non-organic (more info): 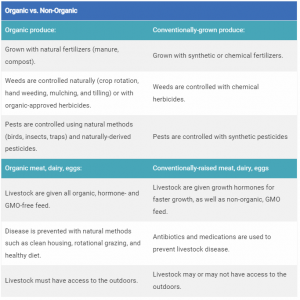 There are several benefits of organic produce (more info):

-Organic produce contains fewer pesticides. Chemicals such as synthetic fungicides, herbicides, and insecticides are widely used in conventional agriculture and residues remain on (and in) the food we eat.

-Organic food is often fresher because it doesn’t contain preservatives that make it last longer. Organic produce is sometimes (but not always, so watch where it is from) produced on smaller farms nearer to where it is sold.

-Organic farming tends to be better for the environment. Organic farming practices may reduce pollution, conserve water, reduce soil erosion, increase soil fertility, and use less energy. Farming without synthetic pesticides is also better for nearby birds and animals as well as people who live close to farms.

-Organic food is GMO-free. Genetically Modified Organisms (GMOs) or genetically engineered (GE) foods are plants whose DNA has been altered in ways that cannot occur in nature or in traditional crossbreeding, most commonly in order to be resistant to pesticides or produce an insecticide.

These facts were compiled for the purposes of the sustainable events toolkit created under the Sustainable Conferences and Events project implemented by Topkinisis Travel and AKTI Project and Research Centre. The Project ENTERPRISES/0618/0046 is co-funded by the European Regional Development Funding and the Republic of Cyprus through the Research and Innovation Foundation.