The #potavristou campaign will be running again this year following its massive success over the last 3 years. Every group or individual can reach out wherever they are, pick up the litter found around them and upload their data using the Clean Swell app or send it through one of AKTI’s social media pages. They can also upload the photos on their own social media pages using the hashtags #potavristou, #akti, #SeaTheChange.

We are reaching out for all the month of September! 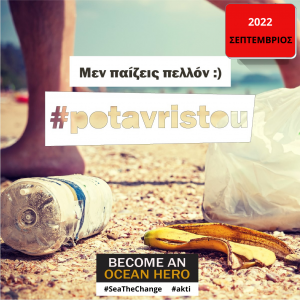 The #potavristou campaign is an innovative example of implementing citizens science. It was first implemented in September 2019. “Potavristou” is a word used in the Cypriot dialect which roughly translates to “reach out” or “lend a hand”. It was used to name this innovative action that was started by a group of volunteers in collaboration with AKTI Project and Research Centre. Of note is how #potavristou became a “prophetic” action. It was developed in 2019 during a time where there were no restrictions on gatherings. However, a year later, during the COVID-19 pandemic in 2020, this was a different story. An action such as #potavristou was well-received as it allowed people to be active and help the environment without endangering themselves or others! 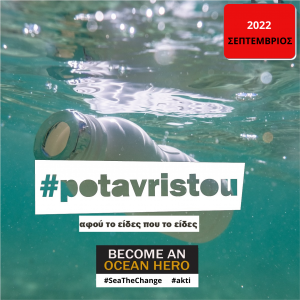 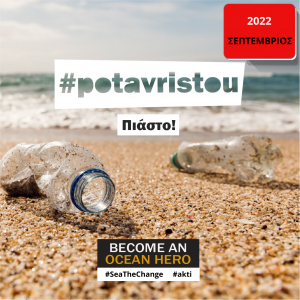 Results from the previous #potavristou campaigns

On the 21st of September 2019 on International Coastal Cleanup Day, the organisers encouraged the audience to help clean our seas and coasts, wherever they may be. On this day, more than 500 people reached out and collected surrounding litter. This included items such as glass and plastic cups, bottles, bags, food containers, drinks cans, nets, etc. 5.5 tonnes of waste were collected that day and removed before they could begin their vicious cycle of entering the sea and coming back into our lives in the form of microplastics.

After the incredibly positive response that this campaign received in 2019, #potavristou was run again in 2020 during the whole month of September. The results from the #potavristou_2020 campaign were astonishing: 2016 volunteers took part, data was sent for 187 different locations in Cyprus and 20 locations abroad, 12 tonnes of litter were collected (70% of which was plastic), additionally there was a reach of 12 million through the media and AKTI’s social media pages!

We continued with this same amazing success in 2021. 2590 volunteers cleaned up 13.5 tonnes of litter across 114 locations in Cyprus and 63 locations abroad! Worryingly, 87% of this 13.5 tonnes of litter was plastic, a much greater percentage than the year before! This shows the increasing importance of the #potavristou campaign and the need to continue raising awareness and cleaning our beaches!

In total, during the past 3 years, 5016 volunteers have been engaged in #potavristou, from all around Cyprus and 134 locations all over the globe, and they collected 30,5 tones of litter! 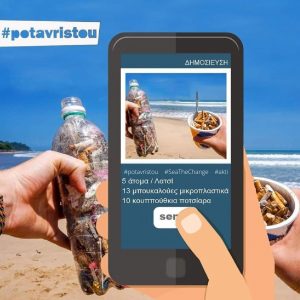 Instructions to get involved with #potavristou

Since the COVID-19 pandemic and the resulting increase in plastic pollution, the need for a greater number of participants is critical!

Therefore, be a part of #potavristou and reach out wherever you may be, to help clean our seas and coasts! 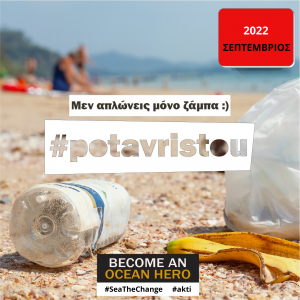