EVENT 1: The aim of the event was the completion of the kick of meeting for the project in Italy and of a survey in Cyprus and in Italy targeting European immigrants in the two countries respectively in order to assess immigrants’ knowledge, perceptions and views on environment, employment and democracy. The research focused on subjects of social interaction, local community, access to information and participation in decision making process and green Jobs in order to elicit the relevant information.

In Italy, the project’s kick-off meetings and discussions were held from the 18th to the 20th of November 2013 to coordinator and monitor tasks, milestones and deliverables. In addition to the meetings, a Round Table discussion was organised in collaboration with Umbria Authorities on 19th November in Perugia, with subject: ‘IMMIGRATION. From the reception policies to return support. Integration and protection of rights and common goods’. Representatives from AKTI and GSI presented the immigration situation and policies in their respective countries and the INTERACT project and goals. Please see the Round Table invitation here and photos below: 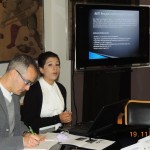 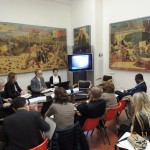 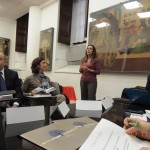 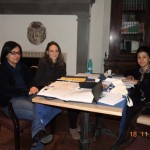 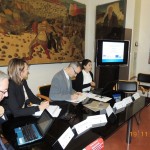 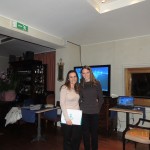 In both Cyprus and Italy, in terms of the methodology, structured questionnaires were prepared and face-to-face interviews were conducted using the snowball technique. The study covered a representative sample of EU foreign workers and long-term residents in both countries.

In Cyprus, a total of 202 face-to-face interviews were conducted: 30% of the respondents were men and 70% were women who also provided answers regarding their children. 81 participants from the city of Nicosia, 51 from Limassol, 30 from Larnaca and 40 from Paphos. The fieldwork was carried out from 7/1/2014 to 21/01/2014. For the national Cypriot report in English, please contact AKTI via e-mail: akti@akti.org.cy

In Italy, a total of 229 interviews were conducted, including 182 participants from the city of Spoleto, 19 from Terni, 9 from Spello, 6 from Foligno, 5 from Trevi, 4 from Perugia, 2 from Gubbio, 1 from Montefalco, and 1 from Bevagna. The distribution of the questionnaires, collection and analysis of results, as well as the writing-up of the national report was conducted from the 1st December to the 31st of January 2014. For the national Italian report in English, please contact GSI Italia via e-mail: info@gsitalia.org

Based on the two national surveys, the project partners produced a joint report highlighting common trends, challenges and opportunities between the two reports. Specific recommendations also derive from the surveys urging for further action. For the homogenized report in the English language, please click here: Common Survey Report .

The launching of the project and the survey’s results were announced and discussed during the weekly radio broadcast titled ‘Stin Avli tis Gis’ of Radio ASTRA on the 2nd of October 2013 and on the 5th of March 2014, respectively.

For the project’s press release in English sent to the media in Cyprus and Italy click here. For publications in newspapers and magazines informing the public on the launching of the project, please see below:

For articles in relation to the survey’s results please see below:

The INTERACT project was also presented in the Academic Conference ‘The role of education in a multicultural Cyprus’ organised by the University of Nicosia on 29th November 2013. The paper titled ‘Environmental non-formal education as a tool for mutual respect: from bio-diversity to cultural diversity was presented by AKTI’s Director Ms Xenia I. Loizidou.