The beach cleanup event was organised by the U.S. Embassy in Cyprus, AKTI Project and Research Centre and was supported by the MARLISCO Cyprus project, on the occasion of the International Coastal Cleanup Day. The event took place on Saturday, 20th September 2014, by the ‘Foinikoudes’ Pier in Larnaca. MARLISCO Cyprus implemented an international marine litter protocol and the data collected was contributed to the Ocean Conservancy database. Students from the American Academy in Larcaca enthousiastically participated in the event. 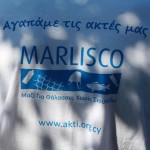 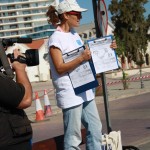 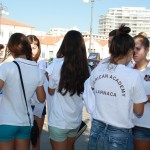 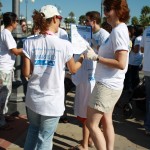 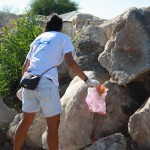 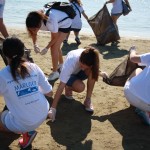 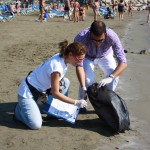 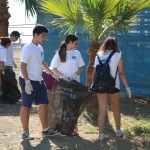 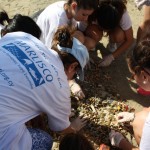 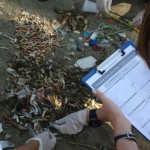 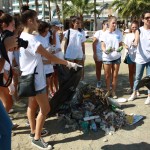 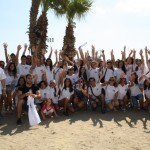 Watch a short film in Greek from the event

Watch a short film in English from the event

Click on a following link to read the text:

The visitor will come across the beaches of Lara and Toxeftra in northwest of Pafos. The beach of Toxeftra is a sandy coast and it is characterised by west winds and huge waves. We can also find the sea turtles Caretta caretta and Chelonia Mydas. Very close from there, the famous Avakas Gorge exists. In the west of the coast we find Lara bay. The vegetation of the area and the magnificent golden beach combined with the virgin nature and the emerald crystal clear waters, give Lara a unique beauty.

Lara’s beaches as well as the nearby beaches (mainly the beach of Toxeftra) are a nesting area for the sea turtle Chelonia Mydas (green turtles) and the Caretta caretta.

Flora and fauna of Akamas Akamas

Peninsula is an area with great ecological importance for 530 species of vegetation, from which 39 are endemic species (found only in Cyprus) and 25 others have been characterized as very rare. The fauna, like flora, is particularly rich in Akamas peninsula. With all this variety in vegetation, Akamas is the only area in Cyprus which combines flat and forest vegetation.

This is a magnificent natural beach. The Petra (rock) tou Romiou, known as the Rock of Aphrodite, is a cluster of small and big rocks, almost adjacent to the beach, therefore they create a natural system of protection. The beach is covered with thin, multicolour shingle and the waters are usually crystal and clear. According to legend, Aphrodite, the Goddess of love and beauty rose from the waves in this strikingly beautiful spot.

The Greek name, Petra tou Romiou “The Rock of the Greek” is associated with the legendary frontier-guard of Byzantine times Digenis Akritas, who kept the marauding Saracens pirates away from the beach with amazing strength. It is said that he heaved this large rock into the sea destroying the enemy’s ship.

The Kourion Beach is located in the Akrotiri area, Limassol district. The long, open beach is at the base of the hill where the ruins of Ancient Kourion and the famous ancient theatre exist. This sandy beach spreads to a magnificent sight view, while the rocky cliffs leave a huge stripe of land, which forms this beautiful beach. The beach is sandy. The big south waves are offering the bathers the joy of playing with them. Today, the magnificent Graeco-Roman theatre is fully restored and used for musical and theatrical performances.

Baths of Aphrodite and Asprokremmos Beach

Asprokremmos beach is located in the east end of Akamas Peninsula. This beach is been characterized by the magnificent greenish rocks which divide the bay into three smaller, the thin multicolour shingle and the crystal coastal water having with the emerald colour. The beach of Asprokremmos is of special environmental interest since it is one of the nesting regions for the sea turtle Caretta caretta and also a region where the monk seal Monachus monachus has a cave.

The Baths of Aphrodite are to be found, west of Asprokremmos beach. The beach near the grotto, is a small rocky bay, surrounded with beautiful greenish rocks that reach the sea in order to create a magnificent landscape. According to the legend, the goddess Aphrodite used to take her beauty baths in a pool of a natural grotto, shaded by a fig tree, which can still be visited. Nature trails set off from Baths of Aphrodite to Akamas, leading nature lovers to incomparable views of unspoiled land.

The coast of Pharos Pervolion is the “leg” of Cape Kiti with eastern orientation. It is a quiet beach, with natural beauty, a background of high hills from the Cape and a beautiful lighthouse. The beach is suitable for those who wish to swim in tranquility. The remarkable Byzantine church of Angeloktisti (means “Built by the Angels”) is been build on the 11th century and has a rare and fine 6th century mosaic of the Virgin Mary and Child between the two archangels.

The lighthouse in Pervolia, at the edge of Cape Kiti, was constructed during the British Colonial Era. With its light, it has saved many ships from hitting on the submerged rocks which are spread all over the coastal area and in deeper waters.

The Cape is one of the island’s National Forest Parks. The sea at Cape Greco is unique. It has a deep blue, crystal colour which is created by the rocks of the region and the intense vegetation. At Konnos region, one may enjoy a golden beach, in a closed bay with pine trees that reach the sea. At Agious Anargyrous diving straight from the rocks to beautiful crystal water, is a unique experience.

From the west side of the Cape towards Agia Napa, the sea caves make swimming exciting. The vegetation is dominated by coastal shrubs of which the most frequent observed species is Juniperus Phoenicea and plants such as chrysanthemums, wild onions, poppies, anemones.

There are about 300 plant species in the area, 11 of which are endemic. The fauna includes species such as partridge, wood pigeon, crow, owl, as well as a large number of migratory birds.

END_OF_DOCUMENT_TOKEN_TO_BE_REPLACED

You can see the concept of the workshop and the program below. For registration contact AKTI Project and Research Centre (for Turkish press here)

Coastal Zones are among the most fragile natural ecosystems, extremely vulnerable to human intervention. Multiple and complex parameters coexist and interact within the dynamic coastal system: natural, social, economic etc. It is a precious natural resource under threat due to overexploitation and increasing human pressures: 2/3 of the human population (3,6 billion people) live near a coastline.

European Union is concerned about the future of its 100,000 km of coastline:

Economic development results in extreme pressures on the coastal and marine environments. What are the limits to such development? The carrying capacity of coastal ecosystems is not infinite.

Integrated Coastal Zone Management (ICZM) has been addressed as a major priority for ensuring the sustainable future of the Planet. In June 2007 the European Commission confirmed that “the response to the EU ICZM Recommendation is part of a slow, but on-going process towards more integrated coastal planning and management”.

However, non-traditional actions like ICZM are still unfamiliar to people and frequently resisted. Locals, especially in Mediterranean, want to have massive tourism development, which gives quick profit. Inappropriate policies, inappropriate management schemes and infrastructure failed to make sustainable development an effective option. It can be stated or concluded that “our present approach to managing our Coastal Zone resource needs a much improved, interactive link between the best interests of natural-resource system and the society that benefits from it” (SPICOSA network)

A major requirement for the successful implementation of an integrated coastal zone management approach is to ensure the effective participation of citizens throughout the decision making process. All citizens, according to Aarhus Convention, have the right for free access to environmental information and data. Authorities are obliged to provide the infrastructure and the support for their participation in the decision-making process, which will define the future of each coastal area and the development model that is going to be implemented.

This is the context that led to the organisation of the workshop “Integrated Coastal Zone Management: from theory to action”. The workshop will take place in Nicosia, the 17th April 2008 at Fulbright Centre.

09:50 – 11:10: 1st Round Table:
Integrated Coastal Zone Management: the way through sustainable coastal development
Key speaker: Dr Alan Pickaver, Head of Policy Unit of EUCC (European Union of Coastal Conservation):
European Union ICZM Indicators: How well are we implementing ICZM in Europe? And what effect is it having?

Panel: (5 minutes suggestion by each member of the panel) 

Panel: (5 minutes suggestion by each member of the panel)

Open discussion with the participation of the audience
Facilitator: Michael I. Loizides – Environmental Engineer- Chairman of Environmental Committee of ETEK- coordinator of Cyprus Environmental Stakeholder Forum 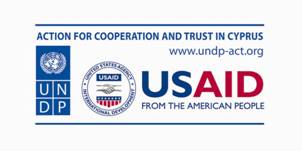 Τhe 15th of March 2007, took place the Workshop: Integrated Coastal Zone Management and the Role of Civil Society, in Goethe Institute in Nicosia . The Workshop was very successful: 10 subjects have been presented and discussed concerning sustainable coastal management, the role of civil society the situation in Cyprus, projects have been presented like CAMP Cyprus, and experience from other countries (eg the case of Elefsina by MedSOS and ENCORA network). 50 people attended the works throughout the day. The European Network for Coastal Research participated in the workshop, represented by prof. Prinos. Dr Jaco Cilliers, Project Manager of UNDP-ACT did the opening of the works, emphasising on the importance of sustainable coastal development for the future of Cyprus and the significance of the active involvement of citizens in the decision making process. The Workshop was organized by AKTI Project and Research Centre, supported by the organizations CYMEPA, KAYAD, AGEM, within the framework of the project NETWORK FOR A SUSTAINABLE FUTURE, which is funded by UNDP-ACT

Youth in Action for Sustainable Living

Stimulate awareness among the youth of Cyprus on the importance of coastal environment, ‘Youth in Action’ Programme

END_OF_DOCUMENT_TOKEN_TO_BE_REPLACED

Hiking at Avakas Gorge on the Akamas Peninsula

📍 𝑨𝒗𝒂𝒌𝒂𝒔 𝑮𝒐𝒓𝒈𝒆 is an amazing masterpiece of nature located at the 𝑨𝒌𝒂𝒎𝒂𝒔 𝑷𝒆𝒏𝒊𝒏𝒔𝒖𝒍𝒂 and is considered as a trekker paradise 🛤, offering stunning views through the beautiful local flora 🌺 and fauna 🐦.

🎥 Here is a video from our hiking trip at Avakas Gorge, through which the beauty of nature is captured!

👉 Activity implemented by ΑΚΤΗ / AKTI Project and Research Centre as part of the Mediterranean Action Day 2020 of MIO – ECSDE dedicated to the importance of marine and coastal Natura 2000. It is organized in the framework of the Annual Programme of MIO – ECSDE supported by the LIFE Programme.

Get to know and love Akamas Peninsula!

📢 Throughout October, we will share with you interesting information about the “Natura 2000” site and specifically the Akamas area!

👉 part of the Mediterranean Action Day 2020 of MIO – ECSDE dedicated to the importance of marine and coastal Natura 2000. It is organized in the framework of the Annual Programme of MIO – ECSDE supported by the LIFE Programme. 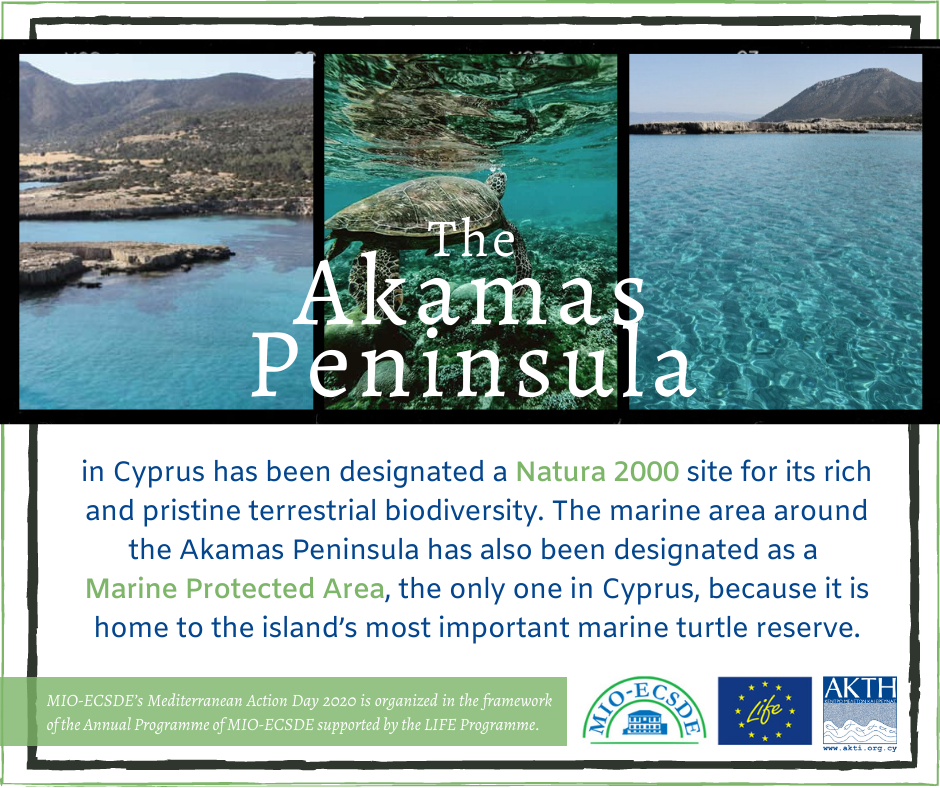 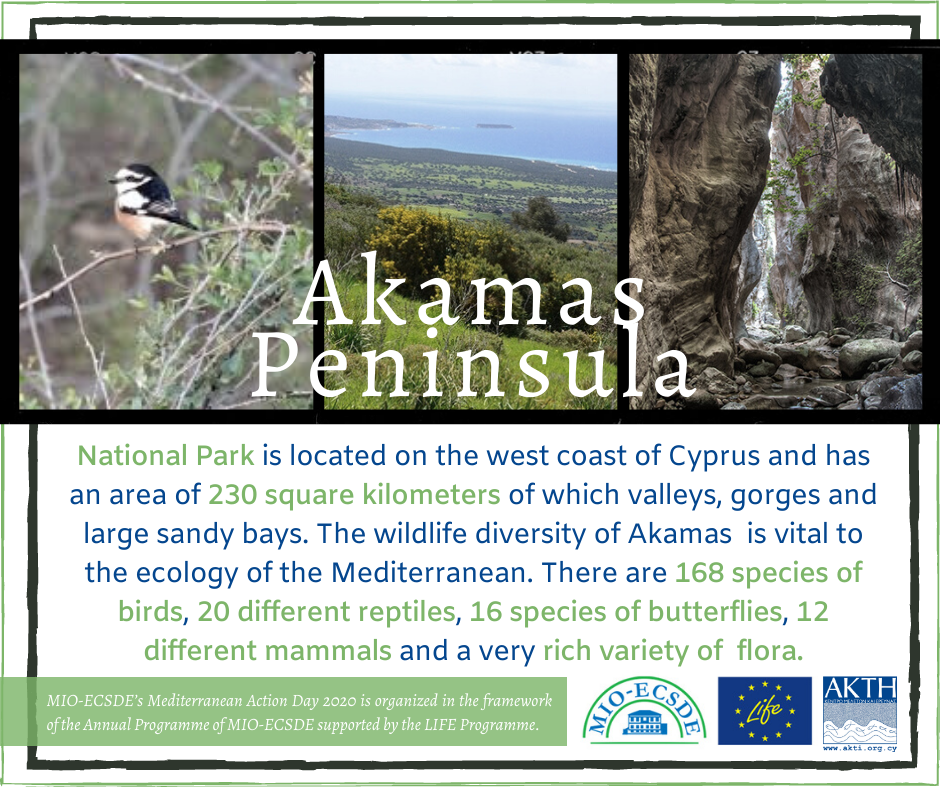 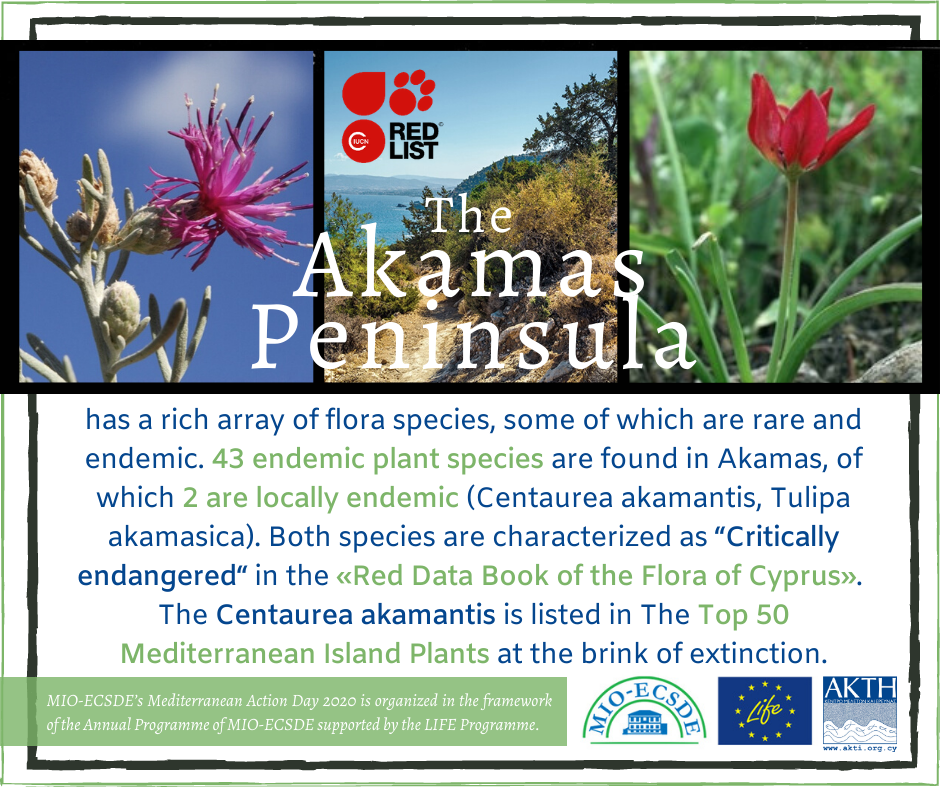 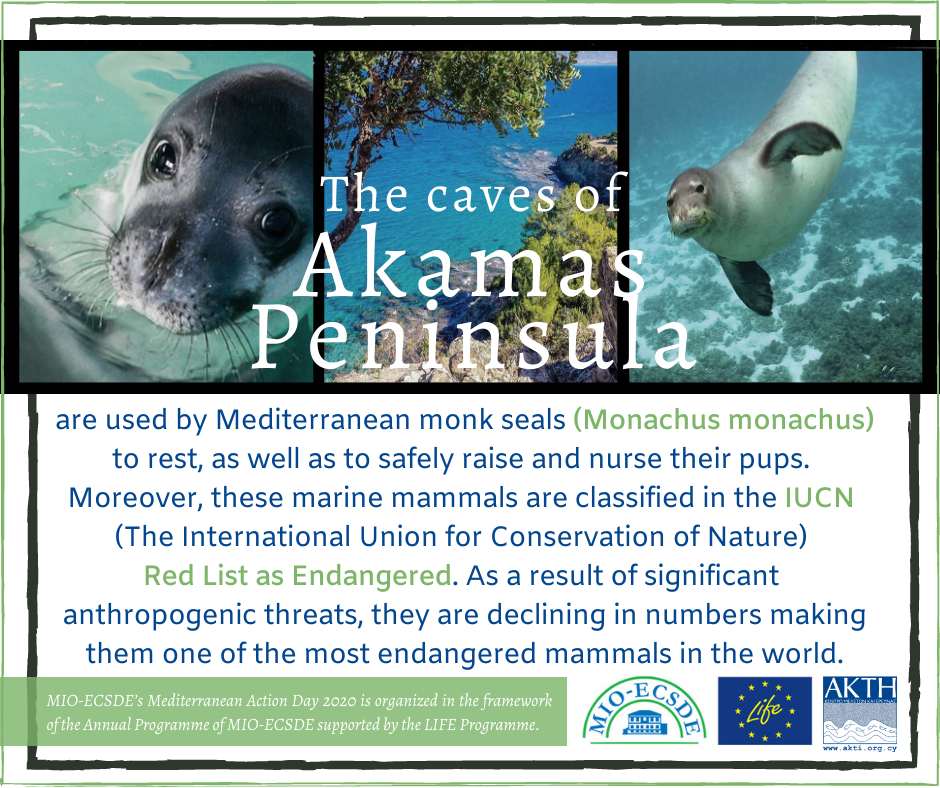 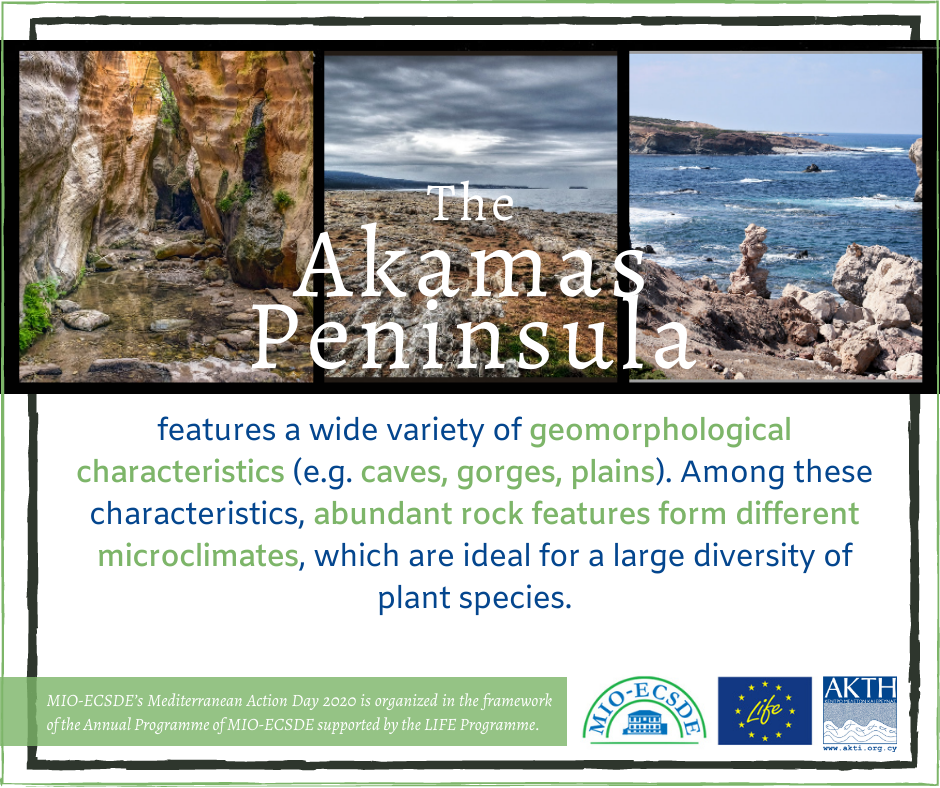 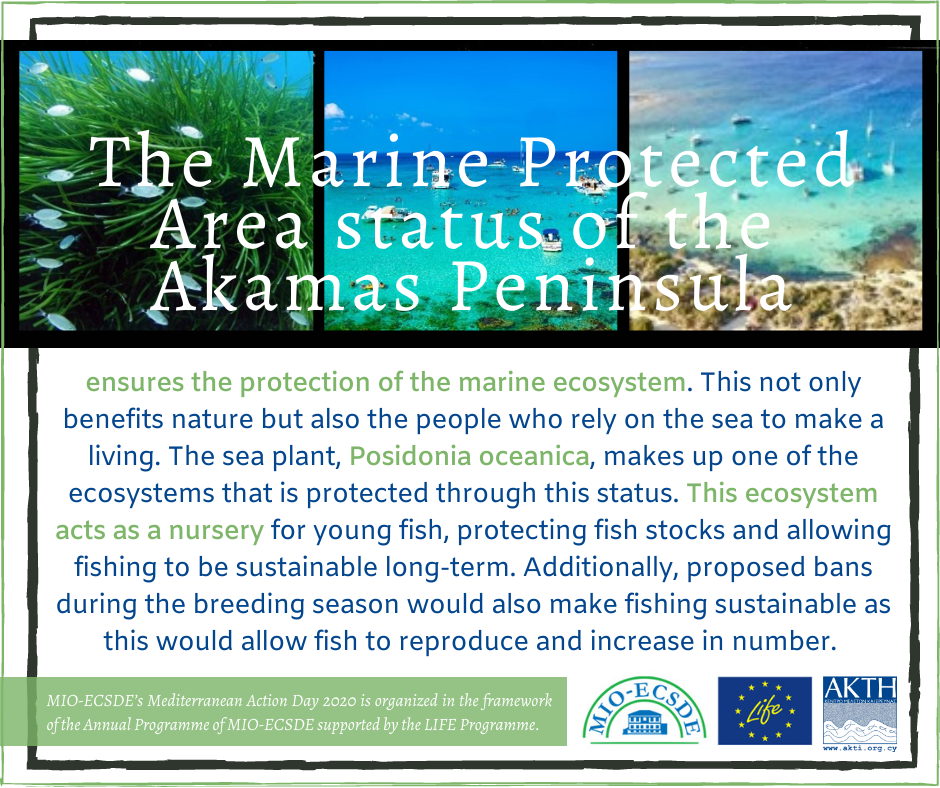 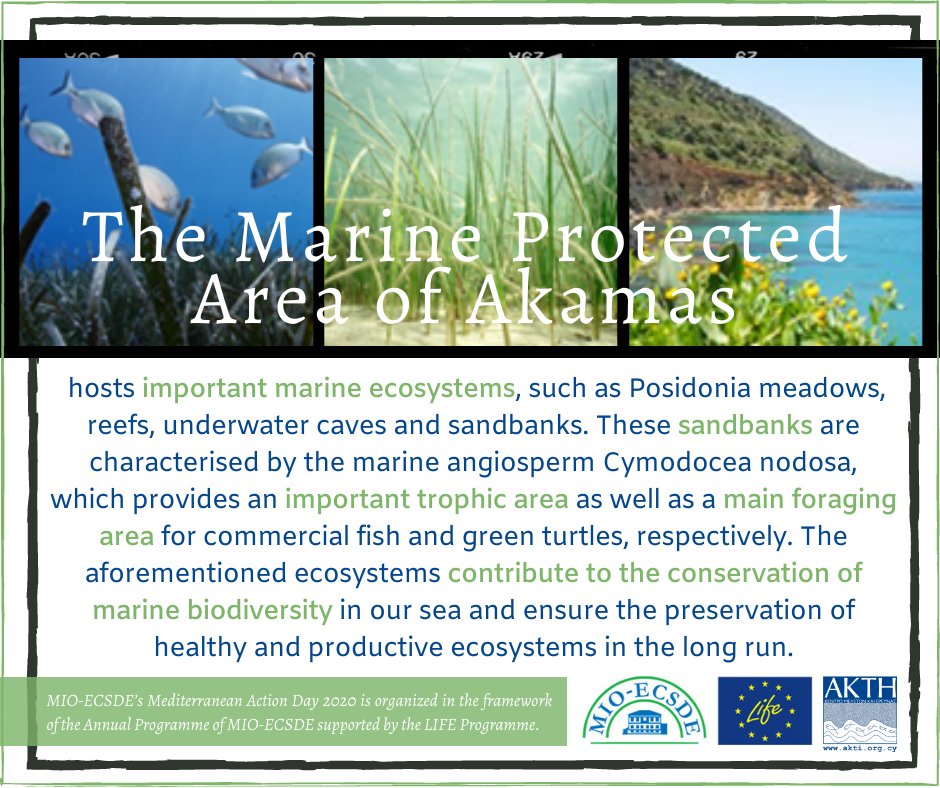 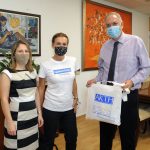 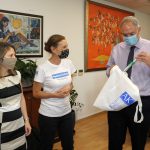 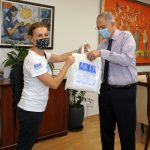 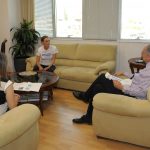 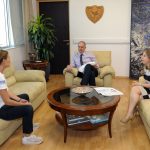 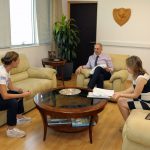 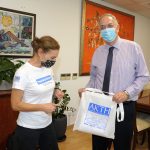 Sea turtle joined us for the 2019 Seabed Clean-up Campaign!

From our seabed clean up campaign yesterday: a sea turtle was with us!!! Our dearest diver Andy Varoshiotis from I Dive Cyprus petting the sea turtle! Simultaneous Sea Bed Clean Up in Cyprus, supported byCoca-Cola Cyprus/ Lanitis Bros. We love our coasts!!!